This is my second post for my so you wanna be a Lolita theme, I hope you will like the theme! At least I like to write about it!
In the small Lolita world are many prejudices and misunderstandings in this post I’m going to write about those and tell some things about it.

The book Lolita from Vladimir Nabokov is about the Lolita style:
That’s not true, Lolita is about looking cute, innocent and doll-like because the ones who wear it thinks that it’s pretty and it has nothing to do with that book.  It hasn’t anything to do with attraction older man. It’s just a misunderstanding because the Japanese took this name without thinking about the Western meaning of it, I don’t think we can blame them because who could ever think that this style would be worn all over the world!

You have to like Japan to wear Lolita:
That’s not true, there are girls (and boys) who wear Lolita only they don’t like anything else about Japan. That’s okay, Lolita is mostly about clothes so liking Japan isn’t required. Some lolitas like Japan and anime/manga only it hasn’t anything to do with Lolita. (mostly)Only Asian girls can wear Lolita:
Everyone can wear Lolita, it doesn’t matter how you look like, if you are a boy or a girl or whatever it’s all right. You only have to love the style and take it serious. 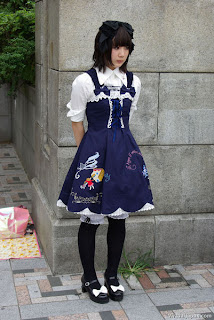 Mana-Sama  invented Lolita that’s why he is the ‘best’ Lolita:I always have to laugh a little bit about this one xD Lolita excised long before Mana started with his own brand, it only wasn’t popular. Because of Mana, more people seem to be interested in Lolita but he definitely didn’t invented Lolita. And having a own brand or shop(s) doesn’t make you the best Lolita...
I admire Mana , but that’s not required for being a Lolita :P
* The prints are so awesome and the older clothes from MMM, I totally love MMM* 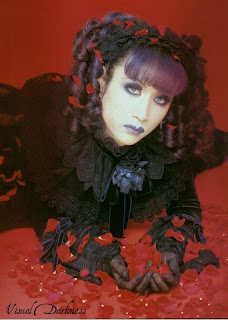 You can only wear one style:
That’s not true, you can wear every Lolita style you want to wear. For example I wear gothic Lolita and sweet Lolita.

There aren’t many lolitas:That’s true, Lolita isn’t that popular as gothic (for example). Here in Holland are 100 of them and maybe a another 100 who have Lolita clothes but don’t wear it very often.  The number is still increasing.

Lolita communities are very strict and Lolitas aren’t always nice.False, if you read the rules it is going to be okay and some forums/communities have very strict rules for joining their community but that’s mostly because of privacy and security.  You don’t want to have weird people in your community?!
And it’s true that Lolitas aren’t always nice,  ‘normal’ people aren’t nice all the time, too.So why lolitas always have to be nice? It’s not human to be nice all the time, but it’s very important to be nice. So please be nice to people! And don’t worry I have never had trouble with anyone, everyone has been very nice to me. At least that’s what I think, I don’t know how people think about me! :P

Can you be too young or too old to wear Lolita?
No, you can’t but it’s important to know what your age is, if you are 40 years old and you look like someone of 40,some styles/clothes  aren’t suitable anymore. It’s the same for when you are 12 years old then some styles/clothes aren’t suitable.  It’s important to know that and wear the clothing that fits your age!  But it’s ridiculous that young people or ‘older’ people can’t look beautiful in Lolita. ^_~ 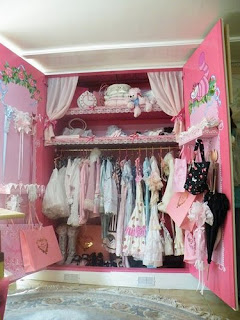 Thank you for reading this! I hope to see you next time. ^^
Best wishes,
Anne
About my  English: English isn’t my first language, I will make mistakes, I hope everyone understands it! I’m trying to do my best!
Oh and about the text under this.. just ignore it, I can't remove it -_-''
Lolita is very expensive, probably I can’t pay so much money for clothes:
True/False, Lolita can be very expensive but it’s  all about what you want! If you want to fill your whole Lolita clothes with new Angelic Pretty (or MMM xD) clothes then you need  lots of money. There is also a possibility to buy offbrand clothes, second hand brand clothes or replicas/bodyline. It’s all about what you want and how much money you want to spend!You aren’t a Lolita when you don’t wear all brand outfits
False, some offbrand outfits look even better than some brand outfits. A brand outfit isn’t always Lolita, and using offbrand things in your outfit make you more creative.
Gepost door Violet op 13:54

Violet
Hello, my name is Violet. Nice to meet you! I'm a girl who lives in an angelic cute world with a touch of darkness. This place is called Angelic Nostalgia,I collect my good memories here. I'm a Gothic Lolita and in Summer I wear Sweet Lolita from time to time. I love traveling, art, books, ball jointed dolls, cats, food and cute things. Thank you for visiting my blog! Do you want to know more about me? Please ask me. ^__^